Heavy metal rules – a fact of life, and the fiery new album from Steel Panther.

Straight out of the City of Angels, Steel Panther are anything but angelic. Surviving on a diet of drugs, alcohol, sex and heavy metal, the covers‐band‐cum‐glam‐metal‐icons have shown us time and time again that heavy metal rules (coincidentally, Heavy Metal Rules is also the title of their latest full‐length effort).

After lowering the bar with their 2017 album, Lower The Bar, Steel Panther are back and stronger than ever with album number five. Heavy Metal Rules hits you hard, fast and relentlessly, clocking in at 36 breathless minutes of what the band so charmingly describe as “audio eargasms”. We broke out the leather pants, studded belts and hairspray to catch up with guitarist Satchel to talk Heavy Metal Rules, the band’s bespoke Pussy Melter pedal, and – because literally nothing is off‐ limits with this man – the Loch Ness Monster.

How does Heavy Metal Rules showcase your musical and lyrical growth as a band?
We try to bring some change to every record that we do. We don’t want to write the same record over and over, because not only is that impossible, but it would be boring for everybody. There’s a lot of new stuff on this record, y’know? Almost every guitar solo doesn’t have any rhythm guitar underneath. All of our last records, there was always rhythm guitar going on underneath the guitar solos. Now it’s just bass, so you can really hear the guitar solo well. That’s just like one of those little things, y’know?

I think the arrangement of the songs are a little bit different. Lyrically, there is a probably a little more bitterness going on because we’re all getting older; I’m getting older, y’know? And when you get older, I think you just can’t help but get a little more bitter. And that’s not necessarily a bad thing; I think there’s a lot of humour in it, just like every Steel Panther record. That’s what we try to deliver.

I try to write songs that are catchy as hell; songs that have great choruses and that make you laugh one way or another. People are going to want to play them over and over and over. And you might laugh while you cry, but that’s okay – I want there to be humour running throughout. But I love this record a lot, so I hope everybody else does too.

In a Trump-era 2019 with climate change threatening to wipe everyone out, how do you go about making the ultimate party album?
Y’know, that’s interesting – I’m sure that you could have asked the same exact question to people 50 years ago, because the world was going to shit 50 years ago too. It was going to absolute shit. In 1969, the world was going to shit and those people all grew up just fine – and, y’know, they all live in big mansions now and they’re all flying private jets and making the world go to shit all over again.

So I mean I think it’s just a matter of perspective, y’know? You have to do what you can to make the world a better place, and you also have to enjoy your life at the same time. Like, you can’t wake up everyday and think “Oh my God, what the f*** is the point? The world’s going to shit.” You have to wake up and go, “Alright, I’m gonna put one foot in front of the other. I’m going to make little differences, but I’m also going to have a f***ing great time.” Because this is your one f***ing life that you’ve got – why would you want to waste it being miserable, thinking that the world’s doomed and that you’ve got no shot?

“All I Wanna Do Is F*** (Myself Tonight)” has been dubbed “the ultimate song about self love and positive self-image.” But doesn’t that clash directly with some of your other songs like “Fat Girl”, “Always Gonna Be A Ho” and “Sneaky Little Bitch”?
I don’t know if it does because, y’know, with “Fat Girl”, we’re not putting fat girls down – we’re actually rejoicing the fat girls. I personally know several fat girls who say that’s their favourite song Steel Panther have done, and they’ve gotten on stage with us and danced to it. Because they embrace who they are, and they’re not afraid to be called fat because they’re cool with it.

It’s the same thing with “Always Gonna Be A Ho”. We’re not degrading anybody by using the term ‘ho’ – I think it’s okay to be a ho. I’m fine with it, and I know a lot of people that are. Not to mention the fact that, y’know, with everything that we do, we like to kind of laugh and have a sense of humour about all of the subject matter that we sing about.

And of course, y’know, if you really delve into it, “All I Wanna Do Is F*** (Myself Tonight)” is maybe a little sadder than all of the songs that you mentioned, because it’s a song about narcissism as well, y’know? If you’re so into yourself that you can’t even look at somebody else, all you want to do is look at yourself, then that’s a little bit sad. I mean, sometimes I feel sad for Lexi Foxx, y’know? He doesn’t want to have sex with anybody but himself – he’s staring at himself constantly.

A Steel Panther show is an hour and a half of jokes about boobs, boners, babes and blow that's driven by a band with incredible skills. 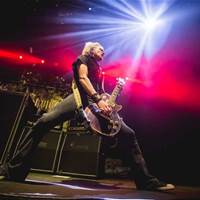