Ash Grunwald is a bonafide powerhouse – not just on the guitar, but in virtually every facet of his busy-as-f*** life. Sarah Comey gets deep with the Melbourne maestro.

Five years in the making – a chunk of which was spent wherein the album was deemed “lost” – Mojo is a mightily significant album for Melbourne bluesman Ash Grunwald. Since he started working on it in 2013, Grunwald himself has gone through a lifetime’s worth of changes: he put a whole separate album out, hit a personal rock bottom, got sober, moved to LA, founded a brand of eco-friendly reusables (Earth Bottles), started a podcast (Soulful Conversations), wrote a book (Surf By Day, Jam By Night), and completely rehauled his approach to the guitar – with which he has undeniably reached virtuoso status thanks to LP9.

Much of the inspiration for Mojo came from Charles Bukowski’s renowned poem “The Laughing Heart” – specifically the line that declares, “Your life is your life, don’t let it be clubbed into dank submission.” Such is a manta Grunwald has adapted staunchly in recent times; throughout our 40-minute chat (we had 15 allocated, but got way too carried away), he repeatedly sings his praise for being alive. He takes not a second for granted, always looking keenly to the future whilst savouring the present.

Between this album, the book, the podcast, and a whole ream of other projects, to say you’re busy would be the understatement of the year. How do you juggle it all? Are you just revelling in a burst of creativity?
Yeah, I am! Last year, I was really hung up on the book, but I was also working really hard on my guitar playing. I’m a pretty obsessive kind of person once I get going on something, and the only thing I find hard to juggle my own froth levels. So y’know, I got really excited about the podcast and did six episodes, and it was rad, and it’s still really going well – I should be editing it, though, but I just picked my guitar up and practised until my fingers were sore, because that’s just what was grabbing me. I find it hard to interrupt my flow when I’m super excited about something. And the main thing that I’m loving at the moment, beyond everything else, is the guitar. I just can’t put it down. I’m loving it more than I ever have before.

You’re talking to the right magazine, then!
Right!? I’ve been playing the guitar since I was ten, and the reason I played the guitar wasn’t for the ambition or to be some amazing guitarist – I just loved playing the blues. In the early days, I would practise a lot and try to be the best guitarist I could be, but when Ben Harper came to town in the late ‘90s, he did an interview on 3RRR and he said, “Y’know, I don’t really sit down and practise my instrument like other guys do – I write songs.” And I thought, “Yeah. There’s a million dudes in their bedrooms that are going to be better than I’ll ever be – why even try to be on that level? I’m just going to write songs!”

I’m glad I did that, because I don’t think I would’ve had the career I’ve had if my emphasis hadn’t been on songwriting. But having said that, now that I’m in my early 40s, it’s like, “Well...” I love seeing guitarists that make you go, “Wow!” I think that makes the show better as a performer, so I stopped and thought to myself, “Why wouldn’t I try and become the best guitarist I can be?” I think somewhere along the line, I somehow decided – or my ego told me – “You don’t have to be a shredder, man! You don’t want to be doing 1,000,000 notes! That’s not tasty! Blah, blah, blah!” And whilst it is important to be tasty, if you can also play those really exciting, high-energy blues-rock runs, then why not?”

It was early last year that I decided, “Okay, it’s time to knuckle down.” And since I did that, almost a year on from when I started, I can play things I couldn’t even think about playing before. It feels really good to just put in more, because the more you put into the guitar, the more you can get out of it. That’s the amazing thing about the guitar – you give yourself to the instrument, and the instrument gives back.

It’s kind of ironic how when you know what you’re doing with the guitar, you hardly need to think about chords or anything like that. You develop this sense of autopilot.
Absolutely. John Butler made this point so well on my podcast – you want to be able to have a spiritual moment there onstage, and just feel like you’re floating through the song. Because to me, that’s the ultimate; when you feel like you’re just channelling yourself through the guitar, it’s like you’re not even there – you’re just observing this flow coming out of you subconsciously. John also mentioned Hendrix – which I was so stoked about – as being a pure conduit of spirit, just letting the creativity flow out of him. And he was like, “If you want to be able to channel that spirit, you’ve gotta have the bandwidth. You’ve gotta practise your ass off.”

When you have that freedom, you find a new level of fun in the instrument. Since I started practising hard about a year ago, every time I look in a corner and I see my guitar sitting there, I think, “Ahhh, you little thing! There’s my little buddy! Come over here, mate!” You feel like you just know that guitar, and you’re itching to catch up with it. And you can’t help it!

I can’t express how different it feels to the decade that I spent barely practising. My outlook was so different, man. Guitars would stay in their case and only ever come out at the gig. I would have a new album out, and I would go to play a song from it at the gig, and I would literally be making things up on the spot because I hadn’t properly played the songs before. They’d be songs I made using beats in Ableton or Garageband, and I would just half-ass them on the guitar after the fact. And when I talk about that now, I just think, “What kind of a crazed idiot was I?”

Tickets are on sale now via secretsounds.com 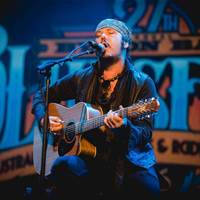 Thanks to Icon Films, we have 10 in-season double passes to give away to ‘Greetings From Tim Buckley’